It came from the scrapbooking aisle

I spend more time in Michael's art supply than you might expect. When I lived in the city, I could go to the art school neighborhood stores, like Pearl, Mass Art, Charette and affect that air of disaffected artist, sizing up the Exacto knives as if I knew what I was looking for.
But I live in the suburbs now. And it is Michael's or nothing, except the world's most depressing Wal-Mart in W. Boylston, which looks like it ate the Ben Franklin that may have stood there before it. So it's Michael's.
What I enjoy about Michael's is not the way it is categorized (though that is very pleasing); it is the way that Michael's patrons are categorized too. Like those people who look like their dogs, craft people tend to look like their craft. And they rarely mix.
Ever think... What if you liked your Harley but didn't like denim or leather?
What if you collected crystals but also cigars?
What if you were a Republican Unitarian?
How does it happen that people with similar hobbies have to be so similar in every other way? We noticed the morning after spinning our own glass beads that the people in the bead aisle tended to be Deadhead types, tall and skinny with an affected Native air, long drop earrings and a Lori Metcalf expression.
Yes, you do. her. 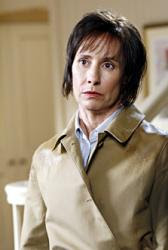 But 2 aisles over, where the doll parts are {{shuddderrr}}, the shoppers are apple-shaped, wear their glasses on a chain, beige sneakers, and Alfred Dunner pants.
Yes you do. these.

The men in Michael's are very interesting. They cluster in woodworking/dollhouse furniture, sometimes in paints and canvas. There are always a few with a wife in the "current holiday" area or in artificial plant material, and they never seem cranky about it. I imagine they built the shadow boxes for the family angel collection. The men together are in wedding favors and ribbons. That's not a slur. You go to a Michael's and tell me I am wrong.
My craft relegates me to the scrapbooking aisle. And more's the pity, because scrapbookers are Haunted Child + Insane Robot. But scrapbooking supplies is where it is at. I make greeting cards -- nothing fancy or particularly artistic, but I write at least 1 letter a day and I enjoy having a one-of-a-kind card to write it on. Scrapbooking is where the blank card stock is, as well as a thousand designs of art paper, backgrounds, templates, and the bags of scrap you can buy by the pound. (oooo. ..haaaahhhh...?)

The scrapbook gals are more gregarious than the doll ladies, though they appear to be on the same branch of the family tree. They are barrel-chested with glasses on their heads, Keds, and "dungarees." They often have teenage daughters with them, who think the whole thing is gay.

In New England, we say "gay" to mean corny, glurgy, unforgivably middle-class, and embarrassingly, obviously, ordinary. It has nothing to do with your sexuality. Gay people are seldom gay. They have too much style. Unless they are your high school drama teacher. We realize we shouldn't say things are gay, but we can't help it. That's reta'ded.

Things I never fail to see in the scrapbooking aisle:
Posting as Caroline Bender at 10:00 PM
Labels: I don't know art...