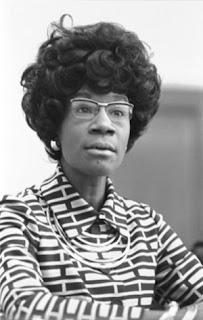 The article contained the sentence:

What I thought after
1) why don't I ever get on projects like this? and
2) what could those criteria be?
was.... How do I get my hands on this ranking?
It took more than 5 clicks; therefore, I will walk you through it.
World Economic Forum was easy: http://www.weforum.org/
We forum, you again' 'em.
Our guest poster today is your great-grandpa.
The "sex equality ranking" is actually called the Global Gender Gap Report (2007). I've been considering how smug the Republican Convention has been about their opportunity to "put a woman in the White House " (not really sure who I am quoting here) until the Democratic Convention yawned and said, "Yes, we felt very good about it 20 years ago."
Then Shirley Chisolm called out, "helllooooo...."

I imagine this is like NASA calling the Kremlin and saying "We put a man in space! A MAN in SPACE!" and the USSR yawns and says, "Yes, and I think I left my watch up there. Could you bring it back, please?"

You know who has put a woman at their head of state?
Pakistan
India
Indonesia
Ok. They seem to get shot, a lot. I'm not saying it's not a dangerous job.

The World Economic Forum is trying to take a business governance approach to "improving the world." They are a Think Tank, though I never really know what that means, founded in 1971 (Chisholm, anyone?) as the European Management Forum. Eventually, of course, they did what all companies do and "went global" to stop Greece and Turkey from going to war. From what I can figure out from this website, they are some kind of UN with money. And they are fond of the word "catalyze."

But we were talking about gender gaps.

Now, this is interesting, because it is not measuring the flat value of the female life, only how far away it is from the male life. Which means that if women are powerless under the thumb of the dictator, but the men are too, the gap could actually be smaller than a country where a woman can own 50% shares in the family oil field, but not drive her own car. These are my predictions, anyway, because right now as I type this, I have not cracked the seal on this report.

So, first of all, who is worse off than South Korea? That's what started this thing. Once can hope North Korea, except see, life is miserable for everyone in North Korea except that one guy. In fact, North Korea isn't in the report, because they wouldn't answer the door.

There are 128 nations on the report. Saudi Arabia is 124. Nepal, Pakistan (woman head of state...once), Chad, and Yemen follow.

At the top: Sweden. well, of course, Sweden. They are better than you at everything. They even had their financial crisis before we did, and taught us the model for it. They have been in the top spot two years running. They will not brag about this, because they are Swedish.

All your Nordics are piled right up there, and as soon as Iceland's economy collapses, they can probably take the #2 spot. But watch this:
#3 - Finland
#5 - New Zealand
#6 - Philippines
#7 - Germany
#9 - Ireland
#21 - Moldova
#31 - United States
What do these 6 countries ahead of us have in common - women at the head of state, and I am not even mentioning the ones with Queens, which are 7, 11, and 12.
5 below, with same, and let me tell you, if people think Governor Palin is a pit bull, they have never met Cristina E. Fernández de Kirchner
#33 - Argentina
#49 - Mozambique
#57 - Ukraine
#86 - Chile
#114 - India
and not even listed, but 3 nations that might be harder to govern than ours- Liberia, Bosnia, Haiti

According to the Worldwide Guide to Women in Leadership, there are 23 UN member nations lead by women at this moment - 11%. Denmark elected its first in 1924. So maybe we shouldn't crow so much.

The 2007 reports says of the United States of America:

The United States’ performance was mixed over the last year and resulted in a small overall drop in its rank, from 23 in 2006 to 31 in 2007 (29 among the original 115 countries). The percentage of female legislators, senior officials and managers fell from 46% to 42% and the scores received on wage equality for similar work fell from 0.68 to 0.64. These two decreases were only partially offset by the increase in the ratio of women and men’s labour force participation rates (this grew from 0.82 to 0.86), resulting in an overall drop in the United States’ score on the economic participation and opportunity subindex, which in turn pulled down the United States’ overall score and rank on the Index. While the United States’ performance on political empowerment is suboptimal (it ranks 69 out of the 128 countries in the Index), there has been an increase in the percentage of women in parliamentary positions in the latest available data.

"That I am a national figure because I was the first person in 192 years to be at once a congressman, black and a woman proves, I think, that our society is not yet either just or free."
~~ Shirley Chisholm
Posting as Caroline Bender at 10:15 PM
Labels: America: The Land and Its People, The Lists