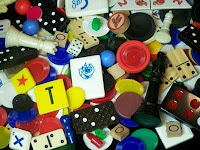 I am about to challenge one of my blog buddies to a public blog-scussion on a topic that we have literally been playing out for several weeks now and have never really discussed -- publicly or privately -- for no reason except that we live a couple of hours apart, and most of our relationship is lived on line.

I will kick it off, because it is a topic she is an expert on (as I am on ending clauses with prepositions) and I never got much farther with than a sample critical thinking session during Freshman Orientation.

That question is: what is a game, and are we in fact playing one?
Cathie and I (I'll use the name she does on her blog, Desert of My Real Life) have been engaged in several rounds of online Scrabble.  I choose those words carefully because I am still forming my argument.  But what I do know for sure is that we are drawing tiles and putting down words.  We are both following the rules of Scrabble.  I'm just not sure it is what Cathie would define as playing a game.

Brief sidebar on the nature of online Scrabble, which has a few elements the traditional board game does not.

a) dictionary look-up.  In most board play, the participants will agree on the dictionary of record (and usually it is the official Scrabble tournament authority) and one must challenge a play that seems a little hinky.  Online, where no one can hear you sound out your tray, you can look up words to your heart's content before you play them, and the dictionary will tell you if it is a valid or invalid play.

b) 2-letter word list.  To paraphrase, Scrabble players have their 2-letter words, but in this version, you can see the full slate of what would play.

c) limitless trials.  The poker element of Scrabble is the skill to try out your letters without looking at the spot, mouthing them, pointing, or counting on your fingers to determine whether it's the play you're going to stick with.  Online, you can lay things out all over the place until you are ready.  And often I do.

This essay needs an image break.  It's a tombstone.

The big surprise to those who have engaged me in Facebook Scrabble is probably the same thing that surprises people in real life, which is... they thought I would be better at it.  More competitive, maybe -- big high scorer.  Not the case.  I am the kind of player who will skip 2 turns to finally spell PENGUIN.  Because what interests me is not the score.  It's just the words.

Cathie's essay builds on the 6 elements of a game, as defined by Greg Costikyan.

1: Tokens.  It's interesting that Scrabble does not precisely meet this criteria.  That is, you have "your" letters and "your" words, but once they are played, they are public domain.  Any player can build on any other player's letters.  But Cathie (and Costikyan) note that the token can also represent your status, in which case, the score itself might be Scrabble's token.  This is our current game.  I am not the one with the status.  It's not that I don't care.  It's just not what I care about.

2:  Goal.  Here is where Cathie challenges some of the current online "gaming" as maybe not games, if the game itself does not set a goal.  Scrabble's goals are pretty simple - get most points and use all the letters.  But I think our goal is simply to pass some time.

3: Oppositon.  Aaaah... now we're getting somewhere.  Cathie plays a shrewd competitive game -- blocking, with available letters you can never use, like an ending V or a B with only 1 space after it.  You'd think someone would find the 2-word list handy here, but she is not my opposition.  Scrabble is just verbal sudoku to me.  The only thing you win is another game of Scrabble, and both people win it. 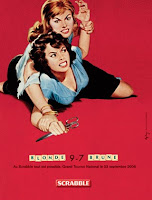 4: Decision-making.  And here is where our styles of play diverge, because we are making very different decisions.  Cathie likes a tight board, short words, lots of overlapping.  I like a spacious board, 5 and 6 letter words, and ideally a word that doesn't get trotted out much.  Not like RAJ, which sees plenty of Scrabble sun, but something like BARGAIN.  That's hot -- especially when it can be achieved through what I call Parasitic Scrabble, putting BAR or GAIN on the word that is already there.

5: Information.  I think the Scrabble equivalent here is that one knows how many tiles there are for each letter, and whether you stand a chance of getting what you need.  In a 1:1 game, this has the effect of eventually knowing what the other player has too; and online, seeing the count of how many tiles are left in the virtual bag.

You know your words too, of course.  Not just the 2 letters and the anagrams that the elite can spot immediately, but also knowing your phonemes and diphthongs -- either of which would be awesome Scrabble words.

6:  Resources.  Here is where I expect an opponent like me frustrates an opponent like Cathie.  And I'll give her the last word to respond.  She plays an economic game -- 20 pt 3-letter words.  I swap tiles.  I hold Q until there is a U.  I am too bored with AX, AXE, and TAX to ever play them, and prefer to wait for NEXUS, a word I have never been able to play, but some....day..... 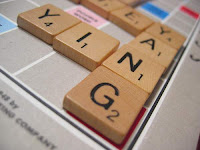 I hand it back to the Perfesser.  I am interested to know if #7 criterion should be that we have to be playing the same game, or is it still a game anyway?

UPDATE:  Cathie responds
"We Are Playing a Game"
Posting as Caroline Bender at 11:46 PM